n the beginning, they found him unsound, laughed at him behind his back, told jokes in their cabins before going to sleep or as they walked along the darkness of the deck; the moon and their burning cigarettes the only source of light on the heaving ship. They had followed him, the crew, when he returned to the mainland and spoke of new territory between the coasts of Hawaii and California. The government had chartered their expedition, as desperate as they were for more land to accommodate the increasing population of wage laborers. Newfound technologies in erectile dysfunction meant the world would never run out of supply, but the limited farmland was necessary to maintain, and so portions of the military budget were siphoned off to pay for explorations into yet undiscovered habitable space.

Daniel Quiroga was settling into his breakfast of eggs in a basket when the report came across the television set. He considered himself an expert in exploration, having read many books on the subject, and he understood perfectly the type of attitude necessary for one about to embark on such an endeavor. Too excited to eat, he paced the room in his tall, slender frame while his breakfast sat cooling. He placed a phone call to a friend with a boat, and within the week, he was alone on the open sea, buffeting in the moon’s pull.

It didn’t take him long, having set sail from California, he flowed to Northern Mexico where the Northern Equatorial Current pushed him in the direction that would change the course of his life. When he returned to the mainland, his words came in bursts of excitement, and he found it difficult to control the volume of his voice.

“Land – untouched – not used or scathed by the hands of man – left by God – granted by God – for the expansion of His earthly realm!” He had learned through his reading that an explorer fully backed by the Kingdom of Jehovah is a nearly unstoppable force for discovery, and so he was sure to call upon Him and give the due credit lest he be perceived as unfit for his duties.

When the expedition arrived, they saw plainly what Quiroga’s tired eyes could not. Rather than a mass of barren land, their captain had stumbled upon occupied territory of refuse that swirled in the ocean’s currents, bobbing in the pull of the sea. Underfoot, the ground crunched and crinkled. It popped and sighed. In certain spots, with too heavy a step, a foot would sink through and reemerge fully soaked. Mountains in the distance changed shape with the wind, growing and shrinking depending which direction the gusts struck, and along with debris, the air carried the salt scent of the water and the moldy smell of wet plastic. Women were crouched along the shoreline, washing their garments, and nearby their children jumped and splashed, ignoring the admonishments to step carefully. They were dressed in shimmering materials that caught and reflected the sunlight, making them appear like folded stars as they knelt over their task. It was then the crew began to question their captain and mock him for his discovery of a place long ago discovered and inhabited.

Quiroga did not hesitate. He ordered his crew off the ship, and as they disembarked and drew closer to the native inhabitants, they saw they were dressed in the same material from which the land was made. “They are one with their surroundings. Amazingly simple creatures, are they not?” Quiroga said to his crew.

“I thought you said this was uninhabited?” asked one.

“I did, and it’s true. It is not yet inhabited by us, the children of the Lord God, the Lamb of Life. He wants us to save these people and deliver them unto His Kingdom.”

On the bobbing, crackling land, the explorers found the local men to be entirely naked except for a tapestry of bottle labels woven into a sort of loincloth that provided enough modesty to not distract. They were greeted with gifts of melted plastic, folded and blackened like pearls of carbon, strung together in a decorative chest piece; they were given freshly caught fish and shown how to weave together strands of plastic into an effective net; the men showed them their weapons of plastic layered and melted together until they formed a sharp edge while the women showed them how to make lye using rainwater and ash. Within minutes, the susceptibility of the local population was evident to Daniel Quiroga, and he ordered his men to round them up. The natives lashed out with their plastic-tipped spears, and bottle caps were slung, but it made no difference against the crew’s guns. They were defeated within minutes, either dead or wounded, and half the crew was on its return journey to inform the government of the success of the expedition and to ready the exodus to the now-safe colony.

Even as the first ships of settlers arrived, the crew members continued to whisper behind Quiroga’s back, snickering he had led them to living like rats, sleeping atop garbage. However, they never once complained about feeling cramped or the lack of open space, finding the mountains in the distance to never be in the same place twice, and they realized the genius of their captain: the land was ever-expanding like the universe. There would always be enough of it as long as they continued to do the nothing of their everyday lives. Eventually, it was prayed, their island would continue its expansion until it reached the mainland of their country and then the mainland of the next and the next, until the ocean and its sea life were nothing more than a memory of a haunted basement. Earth, gift-wrapped in plastic, would finally be ready to inherit the Kingdom.

Quiroga looked out at the swelling mountains and felt a surge of pride. “Thy will be done,” and he counted the zeroes on his government check. 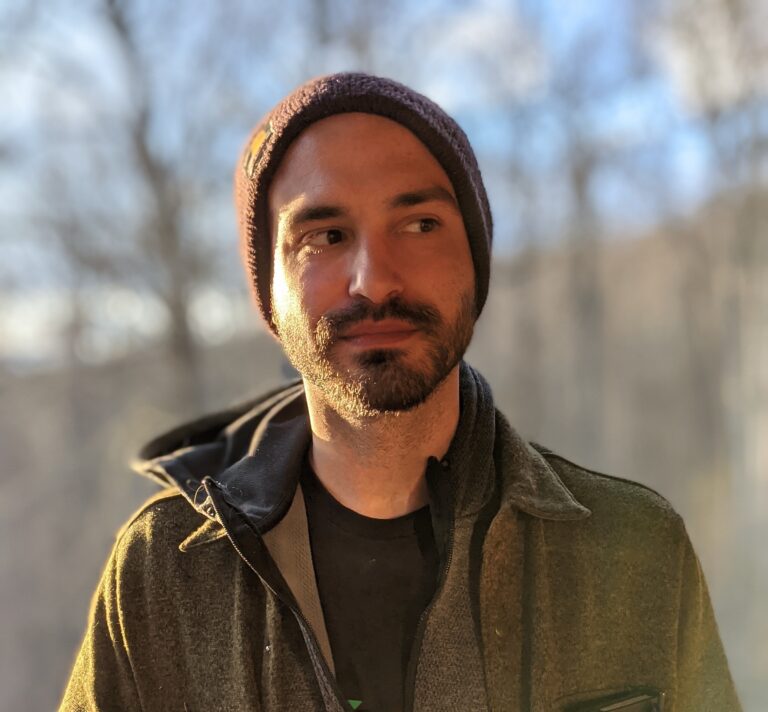 Josh Holycross is a graduate of Indiana University and earned both his M.A. and M.F.A. from Wilkes University. He teaches at Indiana University – Purdue University Columbus. His work attempts to capture the magic of the mundane and has appeared in Blue Lake Review, Talking Leaves, and the chapbook Lost & Found. He has been invited to read across central and southern Indiana, where he currently lives with his wife, children, and spoiled dogs. In his spare time, he can be found on the soccer pitch or in the woods looking for turtles.

REINVENTION SONGS: A LITTLE HISTORY, WITH A CURATED LIST OF POEMS