The Boeing 747 was a massive beauty, stark white with a bold red stripe and “TWA” which to me could have stood for ‘The World Awaits.’ It was the pinnacle of aviation in 1975. The plane radiated power in the feeling of purposeful movement. I was up so high. Everything was new and special on the flight taking me from San Francisco, where I was born, to New York, where my life would be radically changed. The day of the big trip to New York marked a hard break from my maternal family’s presence and values, to those of my father. It started with breakfast at the airport south of San Francisco. My father’s father, the Sr. to my III, joined us. Then, it was time for the transforming journey: the ritual that is air travel.

The flight landed in New York’s JFK airport; and the magic of the TWA Flight Center unfolded, as I entered a walkway that sets the stage for the main terminal. The passage is a tunnel with an arc bowing its length, a world of softly glowing, white curved walls and impossibly red carpet. Emerging into architect Eero Saarinen’s masterpiece of curves, I stood in wonder. The terminal was the future the visionaries had promised us, a clean, inspiring, and open space taking wing. This building was my gateway into New York, and it was spectacular.

The TWA Flight Center served travelers from 1962, until it was closed in 2002, going from the flagship terminal of Trans World Airlines to the last asset of a failed business sold for parts. It had outlived its original purpose. Massive new terminals grew to handle the ever greater number of travelers best served by more practical buildings. In 2019, the Saarinen building reopened. It had been exquisitely restored as part of the TWA Hotel. What was a gateway is now a destination. A 60’s era Lockheed Constellation stands just outside, painted in fresh TWA white and red. The Flight Center has transformed into a cathedral of warm remembrance, a fun, lively monument to a time when design was everything.

Forty-four years later, in 2019, I stepped into the Flight Center for the second time. This time was more purposeful than the last. I was there to draw. But I was also visiting TWA to put my previous passage into perspective. Again, just off a flight from my native West, I had breakfast while the rising sun painted the vaulted volumes, bringing life and awakening memories of the last time I was there. It was not the same as 1975, and neither was I. Each in our own way was restored and with new purpose. I found my views and spent the day sketching for my drawing series about existing spaces in a city I now know well. Like my own life, I am examining the built environment as a blend of original purpose and ongoing reality; the early promise in its later state. My journey was not from West to East, but from who I was then to whom I am now: an artist doing work that grows from within to be born onto paper with a 9B pencil. 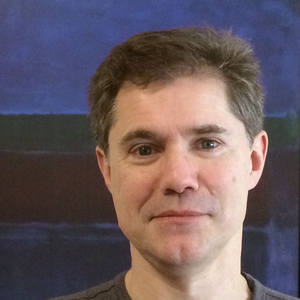