Kyung-Me’s suite of seven meticulous pen drawings are hung sequentially, so that the viewer may traverse the rooms and gain an overview of her elaborately designed interior. Adhering to a rigid one-point perspective, the rooms are replete with references to specific works of art and design objects. Many are furnished with Frank Lloyd Wright objects, citing the architect’s obsessive desire to control every aspect of his designs, down to the exact placement of domestic items. Other art works suggest a more boundless ideal: one room features a hazy Rothko, another a Jackson Pollock. In a sitting room, seen from telescoping vantage points in two of the drawings, the chaos and misery of Bruegel’s Fall of the Rebel Angels hangs beyond a perfectly-placed grand piano seen through a circular doorway. The Tale Of Genji screens and murals appear in several rooms, their axonometric perspective offering an antidote to Kyung-Me’s overarching single vanishing point. Indeed, many of the depicted artworks provide a cathartic break from the imposing order of this luxurious abode, while some, like a violated Hans Bellmer figure, echo the interior’s foreboding atmosphere. Bellmer’s bound flesh sits alone within a Japanese shelving unit, a carnal anomaly amidst Kyung-Me’s tableaux of well-appointed inanimate objects. One may also detect furtive hand or foot; the crown of a head grazing the top of a Harvey Probber sofa suggesting a figure staring out a barred window. The sumptuous domicile appears to have no exit; each room leads to the next in an anxious closed-circuit. The drawings then become a metaphor for entrapment and the desire to escape illusion. 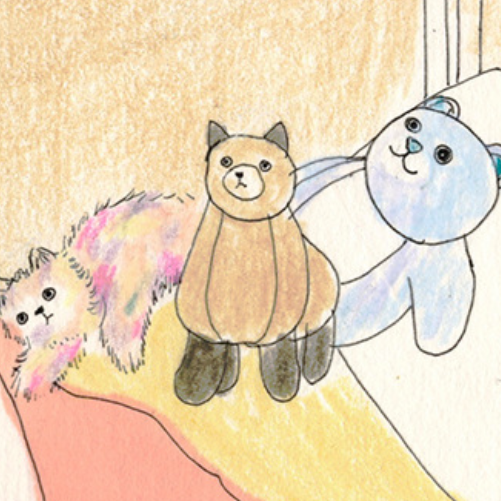 Kyung Me is an artist who makes drawings.