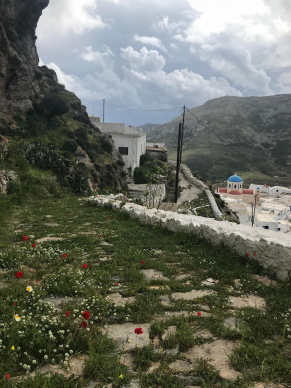 Serifos” is derived from the Greek word meaning barren or fruitless. Whoever gave the island its name must not have seen the land in the dead of March, when poppies grow up between the stones and cows graze in meadows that will disappear by May. Last spring, there were no Lenten rains. Infertility persisted with only dry bushes of fennel and ironwort to brew into tea as winter stretched on. The reservoir, over the mountain, ran low and the villagers kept their faucets open for the unpredictable handful of hours there would be running water.

As the ferry turns in the bay, you see the sailboats first. Your eyes dart along the long stretch of shore, dotted with hotels and tavernas, and then wander upwards to high above the sea. It’s then you notice a cluster of white, and as you focus it becomes hundreds of perfectly smooth and cubed whitewashed houses perched on a mountaintop. This is our χωρίο, our village, Chora.

My uncles like to tell everyone that our village was built high above the sea as a defense mechanism, like a moat, to protect against the pirate attacks the island was once prone to years and years ago. When a pirate did make it through the valley, after hiking up the winding staircase that leads to the village, and survive past the λογγία, the guardhouse (which my uncle has since renovated and turned into his family’s home), they would break down the door of the κάστρο, the church on the tippy top of the mountain, and steal icons framed in silver and gold of the Mother and Child.

Almost a decade ago, nearly a quarter of the island burned. No one died, though the farmers lost many of their goats because their bound legs made them incapable of outrunning the flames. The flames never reached our χωρίο, and our maze of whitewashed paths was left unscathed. Firefighters were brought in from other islands and a water plane dipped in and out of the sea to protect the fruitless rock. Αγία Τριάδα, the church of the Holy Trinity with its shining red dome, which symbolizes Pentecostal fire, stands in the center of a charred hilltop, but years ago it stood untouched and surrounded by a ring of flames.

One summer a medium arrived on the island but took the very next ferry back to Athens. She said the voices of the dead echoed too loudly across the paths of our χωρίο.

Socrates believed Serifos was the island of the unimpressive, and surely not fertile ground for anything marvelous. The rocky texture of this land may have deceived him, or perhaps he had not yet heard the myth of Perseus. King Acrisius locked his daughter, Danaë, and her son, Perseus, in a chest out of fear of his own prophesied death. They washed up on Serifos’s shore, and to their further misfortune the island’s king, Polydectes, mistook Danaë for his property. To save his mother from the greedy king, Perseus accepted the king’s quest to slay the Medusa and win his mother’s freedom. When he returned with the head of snakes, the whole island turned to iron and stone.

Now, if you hike past the old iron mines, you will come across the throne of the Cyclops, a child of Poseidon, named Polyphemus. If you are lucky, he will leave the caves to sit and chat with you. He will most likely say: “Did you know this island is the most mineral-rich land in the whole of Europe?”

The island is at its best and feels most like mine in the earliest hours of the morning. The locals are up for another day of work, the fishermen are out to their traps, and the tourists are fast asleep, except those leaving on the morning ferries or taking their sailboats onwards to Sifnos or Milos. They hurriedly purchase spanakopitas and yogurt from the bakeries. The men stroll past me in breezy, silk shirts and boat shoes, and the women run to make last-minute jewelry purchases, with their gauzy sundresses in various shades of blue and white swirling around their legs.

I woke up this morning next to a man who tells me he thanks his lucky stars he wakes up there with me every morning. I tell him I love him, but only a little bit.

Today is one of the first days of the μελτέμι, the dry northern wind that blows from June to September. The force of the gusts presses up against the soft of my belly as I walk down the mountain to the port. Later in the day, my cousins and I lounge around in their cave-like house, the λογγία. Maya plays her guitar, making up goofy songs about Alexi and me. She plays a Beatles song and Alexi begins to harmonize with her. We become four-five-six-year-olds twirling around the house, playing our parent’s CDs for hours until we get hungry, or until it’s time to squeeze ourselves into the car to go to the beach.

I imagine Γιαγια, grandmother, built our χωριό when she first stepped off the ferry over 50 years ago. She assembled every whitewashed home, painted each door and window frame the color of the Aegean Sea. As the German and French tourists bent against the force of the μελτέμι in their blue and white silks, she braved its gusts.

Γιαγια labored to catch us wet and wrinkly from the sea, rub us dry with scratchy beach towels, and feed us pasta and Fanta at tavernas with paper tablecloths adorned with maps of our νησί, our gathering place, our piece of everything.

We sit on a narrowing stretch of sand and watch the ferries glide in and out of the bay. Alexi says, “All the beaches of my childhood are shrinking.”

I reply, “Would it be denial to wonder if the beaches are really smaller or if we have simply grown older?”

One day, I am nearly brought to tears as I walk through the village. I have a premonition. A warning came in the news report. They found a ring of burnt bodies huddled together at the edge of the sea. Mother and Child running into the Aegean to escape from ravaging fires. I picture everything I have lost in the corner of a room. One day, I’ll swing the door to the room open and have forgotten many of the things piled together. I’ll tuck those I still desire into the crevices between the stones, though the stone houses will become rubble. There are no steps or paths to distinguish one ruin from another. Kαταστροφή. A downward turn.

You wonder if anyone can rebuild the foundation of their lives once it has been lost. Worse still, you cannot banish the fantasy from your imagination.

As children, we scaled walls and roofs in between walking the path from my uncle’s to γιαγια’s house in the πλατεία. In the square, we squealed past παππούδες huddled around tables full of ouzo and μεζέδες, who thumb and flick their worry beads through and over their fingers. We climbed up to γιαγια’s roof and heard her shriek her high shrill at the pitter-patter of children’s feet above her head. Once inside, she sends us to the cracks in the maze’s wall to pick capers, nipping them in the bud before they bloom their stringy white, yellow, pink flowers. I haven’t seen them bloom in years, but Yιαγια has kept those acidic morsels safe in jars of vinegar and herbs. 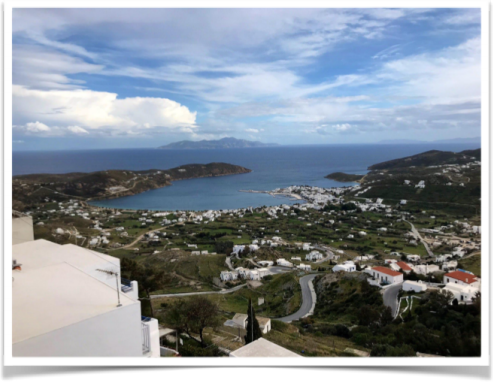 I imagine Γιαγια, grandmother, built our χωριό when she first stepped off the ferry over 50 years ago. She assembled every whitewashed home, painted each door and window frame the color of the Aegean Sea. As the German and French tourists bent against the force of the μελτέμι in their blue and white silks, she braved its gusts.

Γιαγια labored to catch us wet and wrinkly from the sea, rub us dry with scratchy beach towels, and feed us pasta and Fanta at tavernas with paper tablecloths adorned with maps of our νησί, our gathering place, our piece of everything. 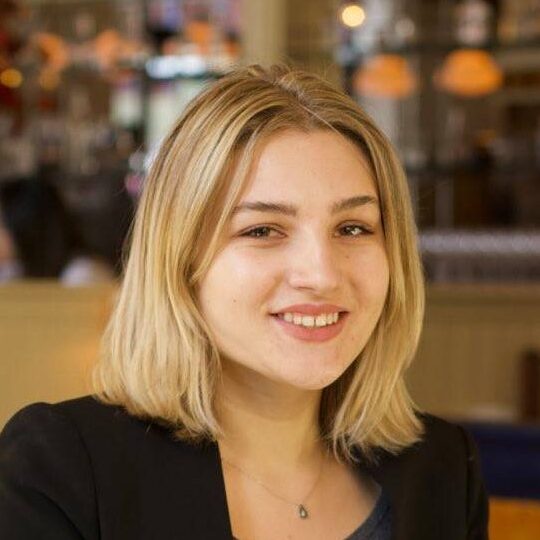 Zoë Barnstone-Clark graduate from Mount Holyoke College with a degree in Anthropology. She is an editor for the environmental publication, The Climatized. She has three pet plants, Glenda, Jerry, and Spiderman, and lives and works in Brooklyn. 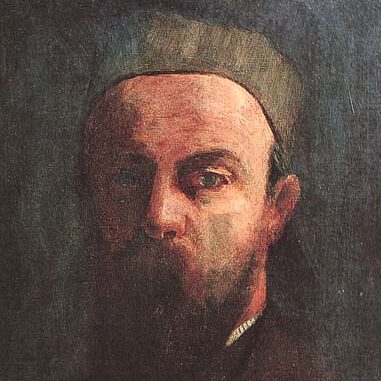 Odilon Redon (20 April 1840 – 6 July 1916) was a French symbolist painter, printmaker, draughtsman and pastellist. Early in his career, both before and after fighting in the Franco-Prussian War, he worked almost exclusively in charcoal and lithography, works referred to as noirs. He started gaining recognition after his drawings were mentioned in the 1884 novel À rebours by Joris-Karl Huysmans. During the 1890s he began working in pastel and oils, which quickly became his favourite medium, abandoning his previous style of noirs completely after 1900. He also developed a keen interest in Hindu and Buddhist religion and culture, which increasingly showed in his work. He is perhaps best known today for the “dreamlike” paintings created in the first decade of the 20th century, which were heavily inspired by Japanese art and which, while continuing to take inspiration from nature, heavily flirted with abstraction. His work is considered a precursor to both Dadaism and Surrealism.