The first time I saw a painting by RB Kitaj was in 1987 in an article in the Arizona Daily Star by their art critic, Robert S. Cauthorn. I have always felt indebted to him for this fortuitous moment; the painting was An Urban Old Man, Who Never Looked at the Sea, Except Perhaps Once, and to say I was intrigued would be an understatement. I was floored. I was at a loss for words to describe what I saw- it was simultaneously complex and simple, abstract and figurative, and modern in a way I had never seen before. I have followed Kitaj’s work ever since.

Years later, in 2004, I read that Kitaj had moved back to the U.S. after the tragic death of his wife. He had lived much of his adult life in England, and was a central figure in a group of artists who redefined what painting in a post-WWII world could be. The group included Francis Bacon, Lucian Freud, David Hockney, Frank Auerbach, and Leon Kossoff. It was RB Kitaj, who had recognized that their defining commonality was that they had all found ways to work in painting vocabularies that were, for the most part, figurative and which also followed neither in the footsteps of European modernism nor American Abstract Expressionism. The name he gave the group was the School of London.

To many people in the art world, myself included, RB Kitaj had seemed synonymous with London itself, so much so, that many assumed he was English. His return to the U.S. struck me as significant, perhaps because he had always been so enigmatic– the intellectual and artistic center (to me, at least), of the School of London painters, and someone whose work never failed to intrigue and surprise me. On impulse, I decided to send him a catalog of my own paintings. I didn’t have his address, so I sent the catalog to LA Louver Gallery where he was having an exhibition. I had no particular outcome in mind and no idea if he would ever even see the catalog, but I went ahead and sent it with a note, one artist to another, saying how much I had always admired his work. Unexpectedly, the gallery forwarded my catalog and letter to his home in Los Angeles and, several weeks later, I received a postcard in my mailbox. It was such a distinctive postcard, too: tiny writing, with a large, rather shaky, red “K.” For the next two years we corresponded regularly, painter-to-painter. 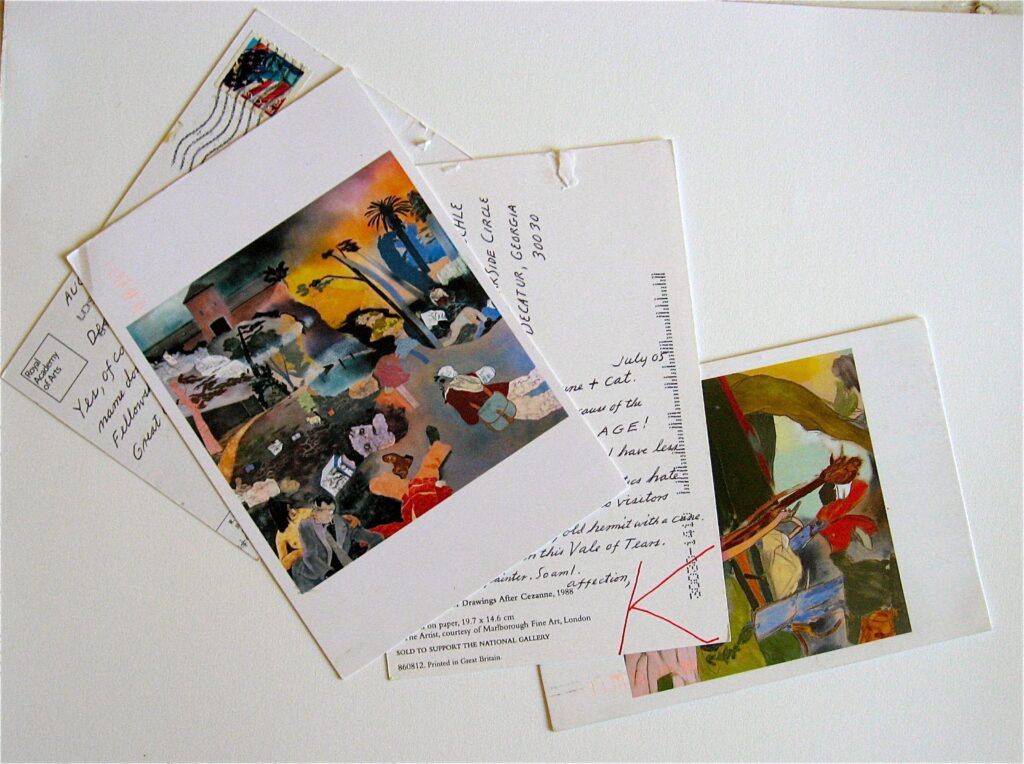 All images courtesy of the R.B. Kitaj estate.

There was a point when it occurred to me that I’d regret it if I didn’t meet Kitaj in person (“Kitaj” being the name everyone who knew him used, including his wife). He wasn’t young anymore, and, from what little I knew, not in good health. So, finding a reason to take myself to Los Angeles, I wrote to him that I would be in town and hoped to be able to drop by for a short visit. After Kitaj replied with some additional contact information – and a reminder/disclaimer that he was “…just an old man” (to lower expectations, I assumed); we arranged to meet.

A few weeks later I arrived at his home, not entirely sure why I was there. Greeting me at the door, he was indeed frail, and it seemed all the more remarkable that he was taking the time to meet. As he graciously gave me a tour of his home, there was a systematic way in which our visit became more and more personal. He first showed me his collection of etchings in the front room and foyer, then we moved through the house past the sunken living room where an archivist had been working on his catalog raisonne. From there, we went to the back of the house into the sunroom/kitchen area. Here were Kitaj’s School of London peers– including artworks by Frank Auerbach, Lucian Freud, David Hockney, and others. A drawing by Freud stood out to me right away. It was a portrait of Francis Bacon, with one odd touch: Bacon’s zipper was down. While looking at this beautiful drawing, Kitaj related how Bacon had once told Lucian Freud that he was “a second-rate illustrator.” Freud never spoke to him again, and Bacon apparently had no idea why. There was also a drawing by David Hockney, a fabulous skeleton study that had been done when he and Kitaj were students together at the Royal College of Art in London. While standing in front of this drawing, Kitaj told me, “Can you believe the S.O.B. made me buy it? He should have given it to me!”

At this point, Kitaj asked me if I wanted some cranberry juice. This offer seemed rather out of the blue, and I didn’t want to inconvenience him, so I replied no thanks as Kitaj walked away from me into his kitchen area. I immediately regretted declining, but Kitaj’s hearing was not good, and he brought me a glass anyway. And I was so glad he had. We sat down at his kitchen table, and this was where Kitaj spoke about some very personal things: his now-famous retrospective at Tate Britain in 1994, and the art critics’ responses (telling me that “half the critics hate me”), as well as the death of his wife. The English press had responded to his show with a strange and misplaced outrage, generated by mainstream critics’ responses to Kitaj’s voluminous writings on art. He had never shied from challenging conventional thinking or trends in the art world, and from what I understood the Tate Britain exhibition became a target for art critics’ myriad resentments. During this stressful time, Kitaj’s wife collapsed suddenly and died from a brain aneurysm. I was surprised that he spoke so openly about this period in his life, telling me that there was no doubt in his mind that the art critics had killed her, and that this was why he had returned to the U.S. after many years in England. It was a remarkably unguarded, personal, and heartfelt moment, made possible by cranberry juice.

After our kitchen table visit, Kitaj suggested we go see his studio. We went outside into his backyard, where there was a swimming pool and, next to it, a converted garage. It was fascinating to walk in and see so many paintings at different stages of completion. There were at least a half dozen scattered throughout the room, leaning against walls, easels, and furniture, and tubes of Winsor & Newton paint in front of each of them on the carpeted floor. I looked closely at these – the raw material from which so many great paintings had been made (the painter in me, I suppose). All of the paintings were done in what I think of as a distinctive hallmark of his late work: highly saturated color that looked like it had been rubbed on. Several of these paintings were of an aged version of himself and his forever-young wife in private moments of erotic interaction. The paintings spoke of such a keen sense of loss and longing that I didn’t want to interrupt Kitaj’s sudden reverie. Upon entering his studio, he had become noticeably quieter and more reserved, giving me the impression he was thinking about what he would work on next. Or perhaps he was thinking about his wife. In retrospect, I think I could have asked him about these paintings, but they were so unabashedly personal that it made me hesitate. So instead, I shared this quiet moment with him, and just took it all in.

I have always been glad I met Kitaj in person. He died soon after, in 2007. Our visit has stayed with me, and I think of him often. There are times when I see one of his paintings somewhere, and I experience again the gift of meeting him, a small window into the intent behind the work of a great painter.

Writing this piece for The Disruptive Quarterly, prompted me to look at RB Kitaj’s paintings with a fresh eye, and I have been more impressed than ever- startled, even- by how alive they are, and how smart. Perhaps, this is why he seems to me to be a particularly appropriate and relevant subject for this first issue: He was tirelessly innovative and expansive in his references, his art deeply rooted in humanism and a visual articulation of complex ideas. His paintings, etchings, and drawings are an engagement platform all their own. He never talked down to his audience, but instead talked up to them. He always went deeper, and that is rare. 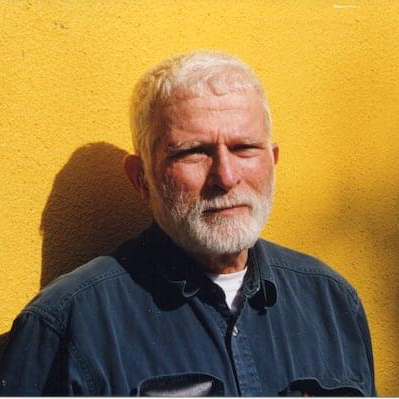 Born in Cleveland, Ohio in 1932, R.B. (Ronald Brooks) Kitaj is considered a key figure in European and American contemporary painting. While his work has been considered controversial, he is regarded as a master draughtsman with a commitment to figurative art. His highly personal paintings and drawings reflect his deep interest in history; cultural, social and political ideologies; and issues of identity.

His various honours include election to the American Academy of Arts and Letters in 1982. In 1985 he became the first American since Sargent to be elected to the Royal Academy. Numerous retrospective exhibitions of his work have been held, including shows at the Hirshhorn Museum, Washington, DC, the Tate Gallery, Los Angeles County Museum of Art and Metropolitan Museum of Art, New York, and most recently The Jewish Museum: Berlin, The Jewish Museum: London and the Hamburger Kunsthalle. In 1997 he left London and moved to Los Angeles, where he died in 2007. 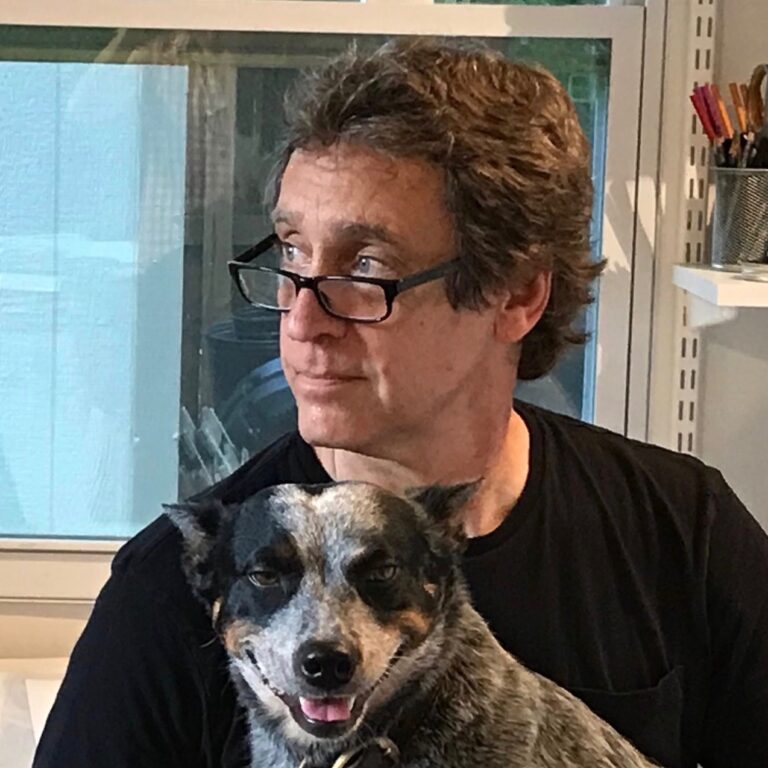 Alan Loehle has been living and painting in Atlanta, Georgia since 1987. He has received a Guggenheim Fellowship for painting, two Pollock-Krasner Foundation grants, and a Visual Artist Fellowship from the National Endowment for the Arts, among others. His work resides in private and public collections throughout the United States and in England, and has been featured in numerous publications, including The Paris Review, Art Papers Magazine and, most recently, Research in Phenomenology. Loehle is a Professor of Studio Art and Chair of the Art Department at Oglethorpe University in Atlanta. He is represented by Marcia Wood Gallery in Atlanta.