I’ve been thinking a lot about family, about the things that we didn’t mean to inherit and weren’t meant to be given. I imagine that my mother, my grandmother, and I are linked through time and space by a single thread, unspooling with my every move. I piece together family history.  I feel undeniably lonely if I think of myself as the endpoint of avoidable mistakes. Yet, I can’t imagine the loneliness I would feel without the existence of that thread at all.

My family is from Bangladesh. My mother and I moved to Kansas City with only each other just after 9/11. My mother tells me people waved guns at us from trucks. When I was four, she married my step dad, a white man from Springfield, Missouri with long hair, ear piercings, a collection of Hawaiian shirts, and corduroy pants. We listened to John Denver on roadtrips. I grew up American. I didn’t recognize that generational threads are not an optional inheritance, in the same way that we cannot opt out of the world’s history. There was pain there, I knew, but it seemed easy to avoid. As I got more lucid through childhood, I learned that my mother and I inherited many things beyond intention, beyond the more visible traditional food and foreign childhood landscapes.

My mother, grandmother, and great-grandmother were excellent in the fields of math and science growing up, which I didn’t inherit. Each woman’s path towards her interests, successes, and personal brilliance was slowed down or stopped altogether by the intervention of a man, usually a husband, or a father, or both. My great-grandmother’s father pulled her out of education to be sold into marriage. This was the norm not so long ago. My grandmother and grandfather married out of love, but he egotistically sabotaged her career, forbidding her to pursue her education or to accept job offers which would have freed her from financial dependence. My mother was rebellious, but still she was married at 19 to a man she didn’t love, who controlled her, and kept her away from her passions and autonomy. The silver lining was that she got a divorce.

My mother tells me she grew up thinking that she was going to hell. There are a lot of common threads between people who think that they are going to hell—they could form an entire subculture, if it was just a little bit easier to articulate the nuances of thinking you are damned. It’s a solitary state of mind, but it can come out in public in a sharp burst. Sometimes they become feeble, overcompensate, or self-destruct. My mother climbed mango trees and skinned her knees raw. She refused to pray in the missionary school she attended. She picked fights with boys and had beautiful dark skin in a culture of internalized racism that favored the pale. Along with our cultural history, we both bear the weight of a gene pool that is riddled with unchecked mental illness, which comes with its own sense of fatalism. My mother pushed things farther than she needed to, because she rebelled against the idea of damnation without believing that she was acquitted of the poverty of her own soul. Sometimes she wears the weight of her past like an iron lung, struggling to breathe fresh air. But that’s not the end of the story.  My mother does away with her sense of damnation by taking control of the story, by discovering herself alongside me.

While we’re quarantining together, I say, “Read this one,” and I hand her a collection of poems by Aja Monet called, “My Mother Was A Freedom Fighter” because to me she is. She recently finished reading East of Eden, a novel that touches deeply on the theme of historical and familial inheritance, about coming from wildly flawed people. She and I relate to it passionately. She makes sure to remind me that beyond a flawed family history is a story of brilliant women, amassing autonomy with each generation. She doesn’t let me forget that my grandmother was, for a while, one of the only women in Dhaka, Bangladesh, who rode a motorcycle, or that she rarely failed to beat her husband’s colleagues at chess.

When I tell you my family’s story, I feel trapped by history at the same time that I refuse to carry that feeling into my actions. I am writing about turning my story toward self-determination so publicly because I think people now, especially young people, feel damned by the mistakes of the past and, worse, they feel damned to make the same mistakes. We do not get to opt out of our historical inheritance. While Trump was voted out of office, the structures that put him there in the first place are very much still alive, a series of avoidable, yet unavoided mistakes. It’s not new to feel uncertain, but it is undeniably lonely. Maybe for some there is comfort in finality, in joining company with those who believe that we are absolutely, most definitely fucked. It’s easy to feel damned by the history that got us here, and it can feel like an obscene gesture to have unwavering hope. And yet, college-age students, my age and even younger, have pushed our culture in fantastic new directions, directions that are more accepting, nuanced, and liberating that show us our hope opens to the inscrutable blank space of tomorrow.

Here is a patch of skin I remember dearly,
as a sidewalk scar,
buried in the tissue of my left knee.
Like a nickname it might sit behind glazed eyes,
remembered as a frantic October.

No,
not a sidewalk-
a concrete balcony,
a cocktail dress,
a blazer with a book in the pocket,
a waterlogged alibi for the witless.
We were there together,
trespassing with drunken affection,
The dog barked.
The knee bled.

When kids learn to draw,
sometimes they think it clever to trace the contours of an image,
gaining little skill in the process.
We traced self description,
opened our empty mouths to deify dissatisfaction.
We were there together,
grating over circumstance,
parroting sentence structure,
Five words again and again.
What would you do if?-
Now is the time to-
What did it mean when-
We were there together, just like everyone else.
Felt trashy with guilt,
we tried to grow spines like maples,
while walking a tightrope wire.
As blossoms came to count blessings not sins,
we still couldn’t lick the paint;
Trust our function nor place, in the order of days,
breath without category.
Murdrum is a palindrome for a crime against someone unknown,
made to distinguish the more personal act.

I have yet to learn a word to describe,
collective cruelty towards persons unknown,
nearby,
abstract,
By way of distraction.

So what if nothing is understood
The world sews its seeds deep
Under your skin regardless
Taking its sweet time.

In Catholic school I learned a lot.
About Benedctine monks
And silences put to the test.

Children are like sponges I know this
From experience.
Soak up the brass tacks from management
Hear polluted yawns.
Listen to national public radio
On car rides to school
Saw the phrase “save a tree, kill a bush”-
A bumper sticker fifteen years ago.
Learned about Iraq
before my 7th birthday,
Not a malcontent just yet.

So what if nothing is understood
The soul claws its way through
The body regardless
Paying off debts.

On the internet there are graphic images
Of people in places
Where I am from.

I cannot string together the story of my actions
Until much later.
Swam out past the empty beach,
Water too cold for leisure.
Swam past the buoys and out to sea,
And back again,
don’t worry.
Saw the phrase “intermittent reinforcement”
And thought about trust for a while.
I’ll learn about myself,
Before long.

So what if nothing is understood
The voice crawls away
from the speaker
In time,
regardless. 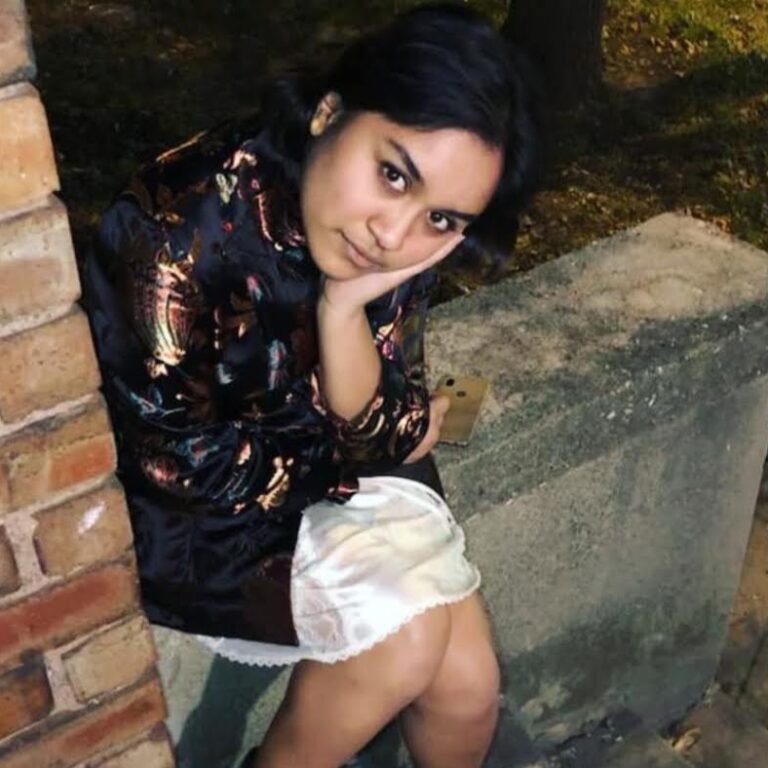 Yasmeen Mir is a junior at the University of Missouri where she intended to be a journalist but switched her major to anthropology, so she could break journalistic rules and publicly form opinions. She aspires to be an agent for change as both an academic and a creative. Although she comes from an immigrant family, she is undoubtedly midwestern for better or for worse.